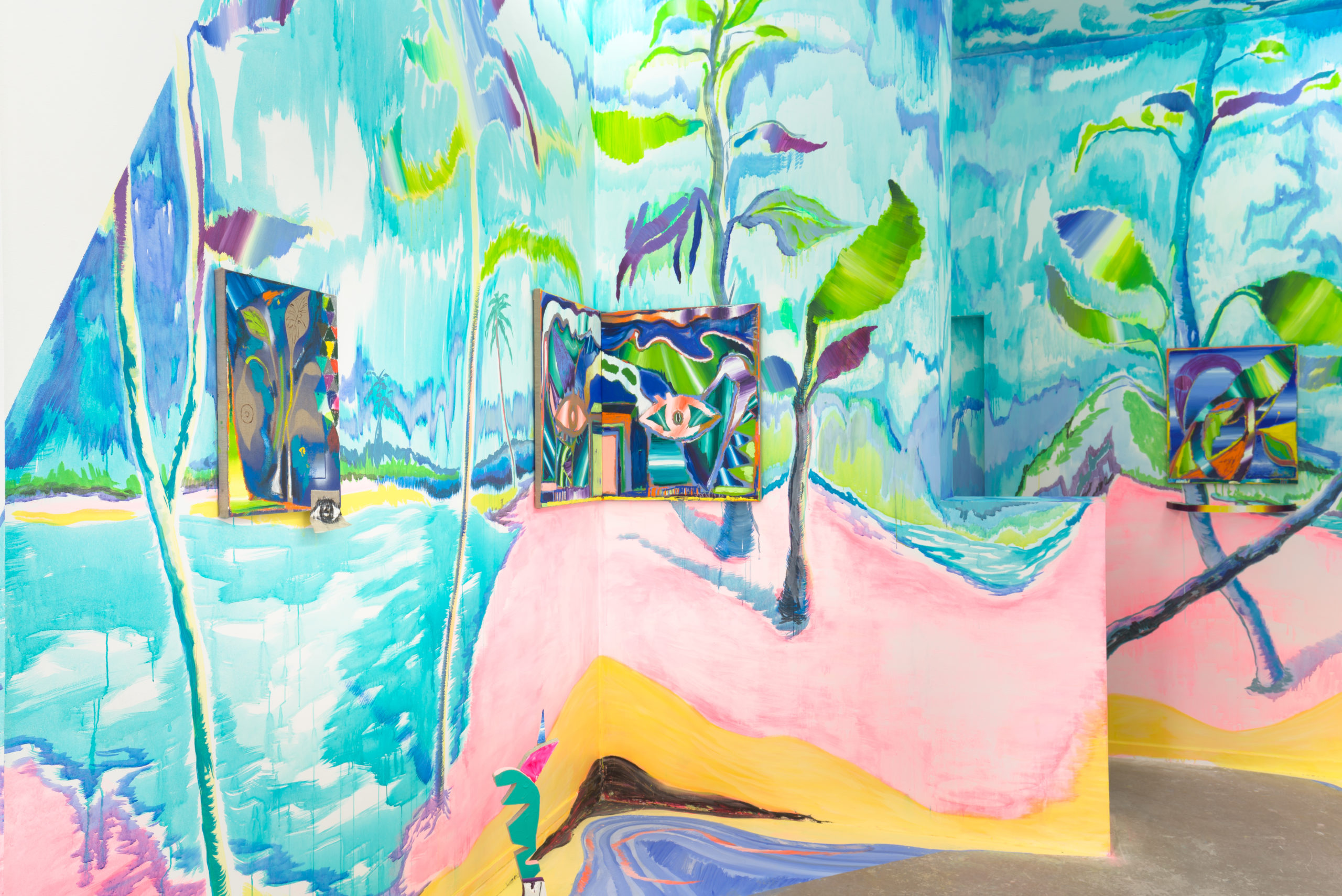 At dawn or dusk – and only when the weather is fine – a green ray could form above the upper rim of the solar disk as it rises or sets. Is a green ray produced by an atmospheric phenomenon, an illusion of the vision or the variance between the perception of the horizon and the earth’s curve ?

In affinity with this optical manifestation and its theories, the painter Allan Villavicencio continues his experimentation with painting as perception: visual perception, sensible or material perception, and physical perception. For him, painting is an accumulation of matter and sensations. His practice oscillates between a formal relation to a pictorial object, and a gestural and intuitive process that includes the traces and hazards of chance.

Taking inspiration from the spatial experimentation characteristic of Mexican muralism, from the sensations of navigation in 3D virtual landscapes, and from the energy of the urban environment, Villavicencio conceives this exhibition as a total landscape. It brings together three corpuses : a mural painting, acrylic paintings and projections of paintings. The constant shifts between these different ensembles – between the figuration of a deconstructed tropicality and the distance of abstract motifs – encourage layered readings and the ambiguity of relations. The mural section sketches a space in motion in which the notion of centre is evacuated, as is the possibility embracing the ensemble. The acrylic paintings depict fragments of visions. The projections constitute residues of the landscape.

Devised through different procedures of excavation and aggregation, this «landscape-fragment» is infused with a tension between a sentiment of immersion and a fractured, piecemeal character whose coherence is broken in places. Based on a classic motif of art history – landscape painting – Villavicencio convokes a symbolic narrative of the perception of space. To a linear perspective and a unified horizon – space representation rules that may have for corollaries the navigation, discovery or the idea of another to reach out1 – he prefers systems of disorientation. Mural’s plasticity merges with a vertical perspective that could be virtual. An extravagant phantasmagoria replaces the horizon as far as the eye can see. New relationships between old and new, body and painting encourage sensory stimulation

Throughout, Allan Villavicencio sows mental reminiscences of images and gestures. Here and there we can see echoes of the hitherto erased massive and interlaced sculptures of David Alfaro Siqueiros’ mural, America Tropical (1932), or the Cubist accents of Diego Rivera’s Paisaje Zapatista (1915) in its organization of hollows and protrusions. These visual echoes act like layer “masks” superimposed on one another, both disjointed and connected together.

Other memories are the ones of the body’s movements in multiple directions which invite a re-reading of Maurice Merleau-Ponty’s final work, L’Œil et l’Esprit (Eye and Mind, 1964), written by the sea, in another light: “we must go back to the working, actual body — not the body as a chunk of space or a bundle of functions but that body which is an intertwining of vision and movement”2. Here we have a visibility experienced by the body as it paints, but also by the viewer contemplating the painting. It is all a matter of sensible focal distance, of the “seeing-seeable bod”. It is up to us to ask ourselves what we have before our eyes and what its modes of existence are. Continuing in the words of the philosopher, these elements, “Light, lighting, shadows, reflections, color, all these objects of his quest are not altogether real objects ; like ghosts, they have only visual existence.”3

“In Search of the Green Ray” thus unfolds in a combinatorial of colours and forms akin to camouflage, trompe-l’oeil, and to mirage, in the image of the observation of the atmospheric phenomenon whose awaiting it describes. In a reflection on the in-progress and the completed, it may be perceived as its pictorial act and the quest for the Green Ray : that of a pretext to go searching for the visible and for disorientation, for fragmented perspectives. A deflection against the line.