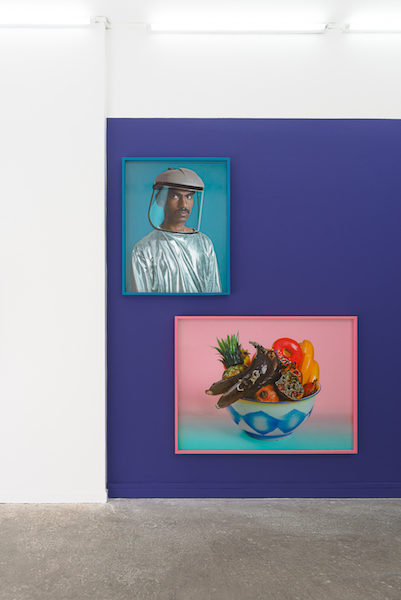 On 2 October 1925, a Black woman electrified the Revue nègre show at the Théâtre des Champs-Élysées in Paris as she danced the Charleston, wearing a string of bananas. This brilliant woman was Josephine Baker. Having escaped US racism, she very quickly understood the «noble savage» dynamic. On coming to Paris, she used her «intelligent body» and instrumentalized herself in her quest for freedom, developing a «natural» animal corporality that made her France’s first black star. While the slave Sawtche was placed in a cage as an object of desire, Josephine Baker voluntarily became a curiosity, a character that might have been displayed in a universal exhibition. But who desired a curiosity clad in bananas? «[When you] examine the nature of the reception that the Europeans gave her, you can see the same racist rejection, but expressed differently: a subtle and biased racism that turned her into the representative of a primitive sexuality that was both unbridled and diabolical; a black sexuality capable of satisfying all the erotic fantasies of the white, Christian male, tamer of the wild world». To be free, Baker put her body at the service of exotic desire. This relationship can be read in several ways, but the one that interests us here is that of the «intelligent body», a tour de force that is still pertinent in the world today.

My body ≠ Ta chose (My Body ≠ Your Object) is a project in which the Other is intentionally reified as a strategy to survive exoticization. Evoking the spirt of Josephine Baker, the exhibition does not intend to denounce or to victimize. On the contrary, it aims to highlight dynamics in which one’s own corporality becomes a means of controlling others. My body ≠ Ta chose reveals a kind of «voluntary servitude» in which the freak is a trap at the service of others. It brings to light works in which the artist ridicules the tropical savage architype through this ≠ symbol that represents both equality and non-belonging.

This approach does not stop at manipulating desire. In other contexts, intuitively, the body may defend itself by adopting a «savage» posture before the aggressivity of another’s gaze. A prime example is Juan Downey’s Laughing Alligator, made during a trip to Amazonia in 1978. In this work, the artist and his family travelled the Amazonian jungle researching into Yanomami funeral architecture. At one point in the journey, in the middle of the forest, Downey averts his hand-held camera before the Yanomami guides who instinctively pulled out their bows and arrows in an intuitive defensive gesture.

This intuitive animality is also at times an object of derision. In the tourist regions of the Amazon, this reaction is repeated: indigenous peoples caricature their bodies and their culture to exploit the tourist gaze. Whether it be intuitively like the Yanomanmi in Downey’s video, or premeditated like the indigenous Pemón woman who dresses up as Pocahontas for a dollar a photo, this process of corporal intelligence is fascinating. It has been a constant source of inspiration for several contemporary artists, aware of post-colonial dynamics. Jean-François Boclé evokes this approach in his Mon cannibalisme avale ton capitalisme (My Cannibalism Swallows Your Capitalism), an ambiguous phrase that directly references the fantasy of the savage manifestly unsubmissive to white exploitation. Mixed-race Brazilian Paulo Nazareth dons a horse’s skull to sell his image of bestial man. This piece superposes with Desi Santiago’s Andrómeda, a tropical landscape in translucid silicone that gives the impression of being made of body fluids; Christto + Andrew, in which the tropical archetype becomes a decaying sugary artificial image. With her YouTuber humour, Fannie Sosa presents Cosmic ASS, a documentary in which she analyzes the symbolic and spiritual sentiment of the Twerk 3 movements. This documentary paves the way to better understand the video by the Brazilian duo Bárbara Wagner and Benjamin de Burca. Like a series of annotations on the relationships between bodies, cameras and movements present in the documentation of a typical dance from North-East Brazil, Faz que vai (Set to Go) reflects on the signification of the carnavalesque within the different preservation strategies of Frevo as a symbol of marginal bodies, and not as a commercial product.

My body isn’t your object is an intimate narration in the public space. Each of these works is about the protection born out of genetic memory. Each speaks of this «intelligent and animal» body that, with a smile, adopts a defensive stance in the face of exploitation… a feint that does not only concern the «noble savage». This animality also inhabits all the hyper-feminine women whose icy gazes and beauty takes our breath away.