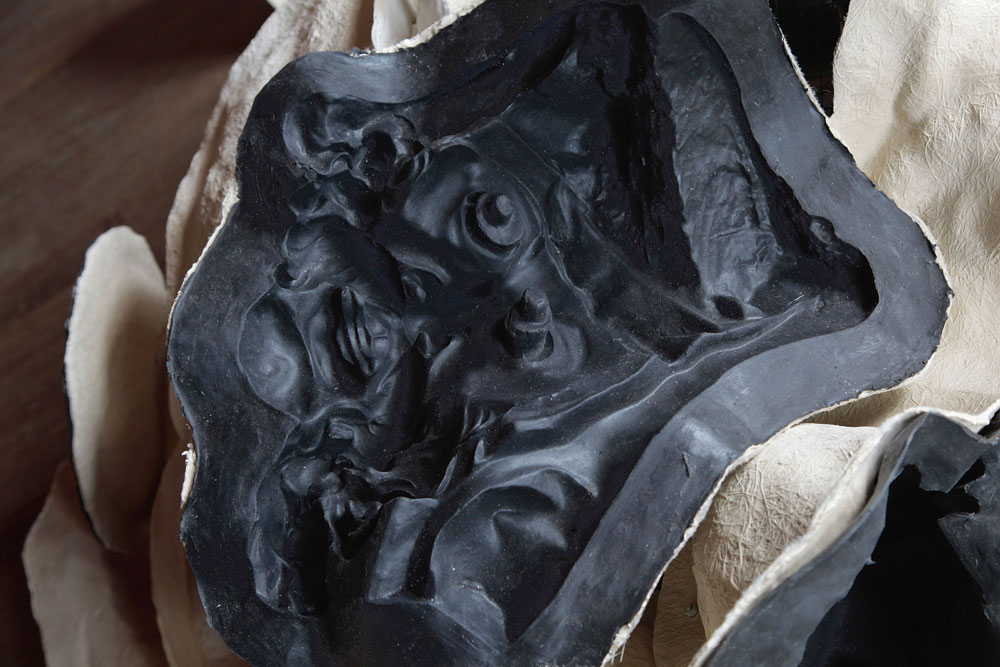 Emmanuel Rivière was born in Nevers, France in 1968.

He first studied at the École Supérieure des Arts Appliqués Duperré in Paris, and then at the École Normale Supérieure of Cachan, France where he majored in Art and Design. While at the Ecole Normale, he also took classes with artist Pierre Buraglio at the Ecole National des Beaux-Arts of Paris. After completing his studies, he spent 2 years (1994-95) in West Africa, mainly in Burkina Faso; and what at first glance appears to have been « an extended period of idleness, was in fact a period for renewing energy and inspiration».

Upon his return to France, he decided to break away from painting and began, instead, to work in photography, typography, and sculpture (with a summer session at Saint Martin’s School in London in 1998). His seminal works in sculpture were produced with masks and ethnographic works (rented, borrowed, or purchased in flea markets) which he could then use as moulds by casting silicon pieces in their hollow interiors or undersides.

«Sculpting in the negative – sculpting emptiness – sculpting blind »: here was a process – a game of mould-casting and unmoulding – which allowed him to eliminate all that was stereotypical in the original artefact and to instead reveal its normally hidden monstrous interior. By reiterating this gesture of mould-casting, little by little he constituted a collection in the negative, a sort of «collection and art-work hell».

Since 2007, Emmanuel Rivière has embarked upon collaborative and pedagogical projects with musicians and sound designers Igor Balost, Jean-Charles Versari, and the musicians of the Orchestre National de France. Gradually he has come to rethink sculptural space and now treats it as a «polyphonic» space where drawing, sculpture, photo, and film can become the many voices of a complex composition.