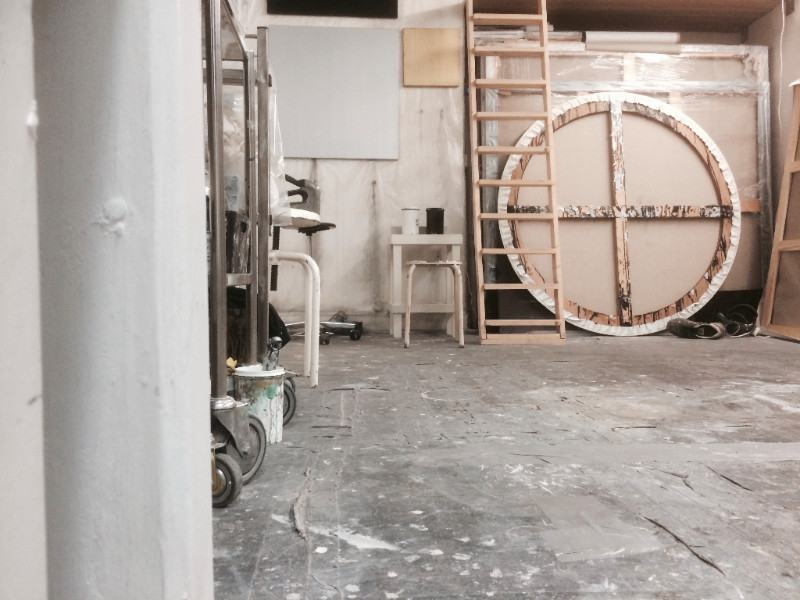 Lightbulbs were an important component in Sébastien Mehal’s life, long before he began using them as a motif in his paintings. As a child in his Caribbean hometown, Fort-de-France, he was fascinated by the lightbulbs, which hung from the ceilings in the Trénelle district. At dusk, they lit up one after another creating a luminous garland between houses. In his Didier neighborhood across the bay, another light show took place in the evening. Mehal’s home had a panoramic view of the city’s tangled district with its makeshift and often incomplete homes. «I wondered what lives were lit up over there by those bulbs that cropped up between doors and windows. The heat was such that people kept windows open to let in some air,” he recalls. These childhood memories became fertile grounds for inspiration. Sébastien Mehal contemplates urban life today, and scrutinizes convoluted urbanizing that devours quintessentially Caribbean architecture. Dense, populated city models with ever-taller buildings and social turmoil reach far and wide. As an artist, Sébastien Mehal is mindful of memory with a strong interest in our human condition, without stepping into the area of nostalgia. «I do not consider this deconstruction something negative, but rather an intrinsic part of the Caribbean’s ongoing development,» he remarks.

His preeminent lightbulb motif – a sort of conceptual, electrical genie – expresses contemporary urban living employing electricity as a metaphor. Tensions are substantial – at times electrifying even – on his homeland island, Martinique. Economic differences are conspicuous. Its social fabric isn’t smooth but instead dons cracks and clefts, telltale signs of social complexity. Nothing, however, has fully congealed. Change can always occur. The urban environment does not remain frozen in a set, postcolonial framework. The lightbulb can also ignite a spark of humanity as Mehal poignantly expresses in his artwork Hertz Spark. (…)

Mehal’s artworks’ titles are poetically revealing. He can see society evolving. Urban life powerfully prevails across the world in densely populated metropolises, which is embodied in his abstract grid of red checkers that invites the viewer to push its pawns. Mehal creates links between Tokyo – another place dear to him – and Martinique, which both share comparable attitudes toward their more rural surroundings. But how can we live together within this sociologically complex new framework? Mehal discretely suggests a possible solution by loading his gestures with implicit healing powers. He covers parts of his paintings with splurges of color produced with medical syringes. The pictorial effect is powerful (..) and a concentrated energy and rage are released with pressure. He could not express this with painting’s traditional means, and felt the urge to bring this metaphor to life because it couldn’t be locked in a delineated, solid shape.